Today was full of coincidences. It has been difficult, as I age, to deny that things don’t happen for a reason. Sometimes things happen that seem completely unrelated only to have them come full circle and suddenly connections are made, dots are connected, and we see the whole picture.

Eleven years ago today our oldest son was just 5 days old. He was born with a congenital heart defect called Transposition of the Great Arteries. In normal people words it means his aorta and pulmonary artery were switched. At 5 days old he was stable enough to undergo open heart surgery and Crash got his second go at this crazy little thing called life. He got the telltale “zipper” as a keepsake. We almost celebrate today like it’s his second birthday.

When DW’s father was in the hospital there was a hibiscus plant in the sunroom across the hall from him. When he was taken in to the hospital the plant had one giant, red bloom on it. Being February, it was odd that it had bloomed. Rarely do they bloom in the winter. On his second day the bloom had withered and hung sadly from its stem. That night the bloom had fallen and DW’s dad quietly passed away in his sleep.

A friend of ours makes and sells bird houses. When we found out he was making houses for swallows we knew we had to buy one from him. Two days later we had two swallows sign a lease and move in. We saw them come and go frequently, mostly during breakfast and supper times. We love watching them. They’re aerial acrobats while they’re chasing bugs to eat and salvaging nesting material. The pair of them flitted around, the female would build their nest while the male would sit on the wire above and watch for danger. They made a good pair. Until today. Today they were no longer a pair. I counted seven swallows on the line above their home.

This morning while DW was updating her Facebook status to share our joy of the eleventh anniversary of Crash’s heart surgery, I went out to the front porch to shake the beach out of our front door rug. That’s when I noticed that one of her hibiscus plants had a single, orange bloom and it was wide open, gulping the morning sunshine. Here, on the 11th anniversary of our son’s second chance was sign from DW’s dad. Then, to see five fledging sparrows flying for what could be the first time, it is many coincidences that happened for a reason. Life. 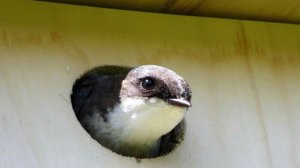 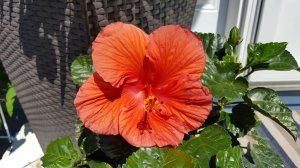