They were hungry for sweets today. Probably because it’s Nana’s birthday and she’s not here (yet) to have cake and ice cream. So this morning we found Woody and Elfis in the bag of chocolate chips.

Fortunately, they are smart little elves and left a few set aside for our chocolate chip pancakes.

They were up to no good, again. As predicted, the closer to Christmas we get, the more trouble they like to cause. This time they were vandals.

They graffitied the boys school pictures! They made Crash a devil and Bang a pirate…

Then while we were at school, Guppie (DW’s Dad) got a doodle upgrade as well. 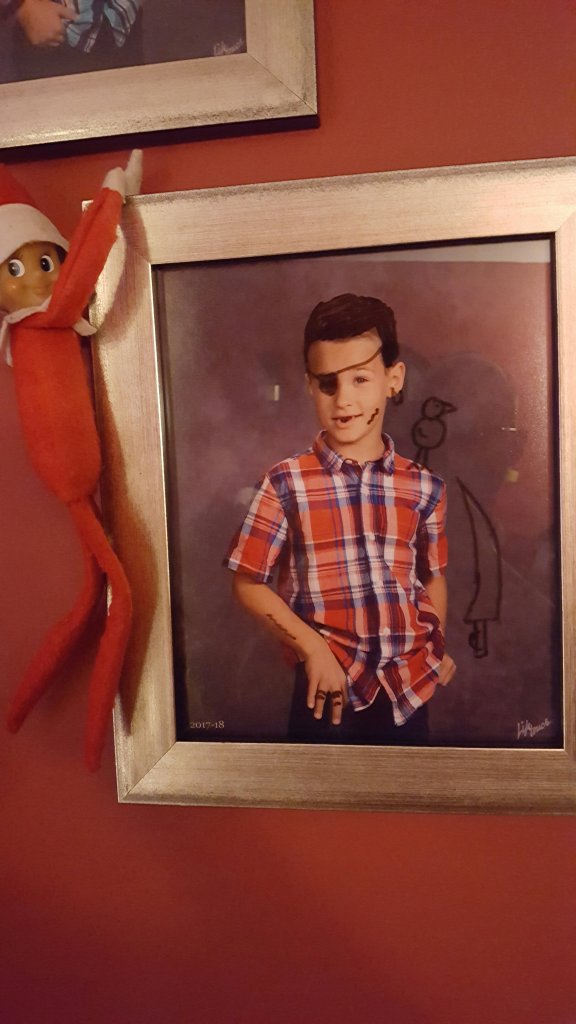 Less than a week away…

Our Christmas concerts are over (more on that later).

Woody and Elfis, like most days, spent the day hanging out. Today they were literally hanging out. They set up a zipline and had some fun in the kitchen zipping back and forth. They performed a few tricks for us, too.

The war was on today…

Over a pair of aces, of course. The best kind of war. When we woke this morning we found the game in progress. Woody had just flipped his card over to reveal his ace. 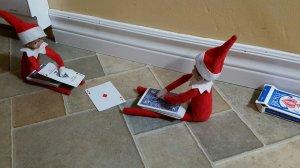 The next time we saw them, they had laid their three cards down. Elfis flipped a 7, but Woody hadn’t flipped his fourth card over, yet. We didn’t know who was going to win! 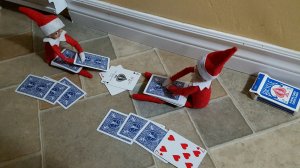 This evening we saw them and it appears Elfis won the war as Woody had a four. Poor Woody lost his ace in that battle. You can see he wasn’t too happy about it, either. He threw a temper tantrum! While we got to see who won the Battle of the Aces, we don’t know who won the war.

You can also find these elves (and more) on Instagram…

We made a mistake.

We all knew what the result would be.

This morning our prediction was spot on.

You see, I bought some shortbread cookies loaded with green icing and sprinkles. They were for dessert after supper. Our mistake? We opened them in front of Woody and Elfis. This morning we found the two of them in the cupboard enjoying the sweet treats. Fortunately, they just shared a cookie. They split one between them. They went halvsies.

If you recall two days ago, Elfis captured Woody under a glass and held him trapped all day. Woody said he’d have his revenge. He is true to his little elf word.

We woke this morning to see a trap set and Woody waiting patiently under the tree for his prey. He used a candy cande and white chocolate peppermint M&M’s for bait. Elves are suckers for peppermint. 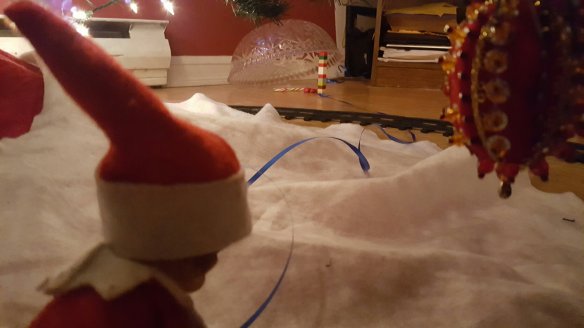 Elfis hung out on the elf that Bang drew and colored and taped to the wall. His holder is meant for cookies Christmas Eve for when the Jolly Elf stops by. From here Elfis could clearly see his intended target. However, this morning, it worked as a perfect perch for Elfis.

*You can just make out Little Snowball at floor level. He’s to hold Santa’s milk.

Elfis’s will power began to break down through the day. When we returned home from school, Woody hadn’t caught him yet. However, Elfis was only feet away from the sweet treats. He was eyeing them long and hard while Woody continued to lay and wait.

After spending all day staring at the delicious treats, Elfis apparently decided that being caught was worth the sacrifice for a candy cane and peppermint M&M’s. I agree, too. I would have been caught LONG before now. Bang was in the kitchen when he heard the bowl come crashing down and he came running. Naturally, DW and I didn’t see them move as we were each playing a game on our phone (DW was crushing candy and I was finding words in my soup). 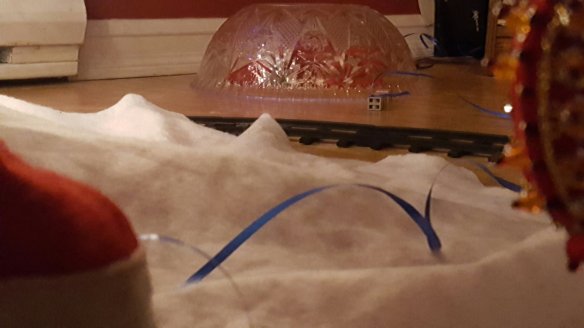 With just 10 sleeps left, I hope they start playing nicer. I doubt Santa will be impressed that they are setting traps for one another. Or perhaps, being a right jolly old elf himself, he finds it quite amusing.

No mischief happened today. Though there was a note from Woody telling Bang that he has a plan to get Elfis back for trapping in that glass yesterday. Today they were just hanging out on the ceiling dangling on their favorite snowflakes.

Nothing but good times!

Up to no good again…

This time it was just Elfis being bad. I’m still not sure how he tricked Woody into getting in the glass. Woody is one gullible elf. Or as we like to say in our house… He’s S-M-R-T smart. (bonus points if anyone knows the reference)

They also delivered a nice and naughty list that only they have control over. We don’t even know where the markers are that they use on it. I appreciate Elfis’s honesty as he put himself on the naughty list for his devious trick. I hope he makes it back on the nice list tomorrow. I hope Woody doesn’t try to retalliate.

Again they were up to no good. This time they were into the toilet paper. Have you seen those bead curtains? The ones you have to part to walk through like you’re Moses up against the Red Sea? Imagine that, except with toilet paper. Classy, eh? They did this to both boys’ doors.

For their mischief they also brought this year’s newest tree ornament, Mario and Luigi, then hung out in the decorative stockings on the bedroom doors for the rest of the day.

Once they were done with the doors the remainder of the butt paper was trailed down the stairs. Poor Bang was in a stupor waking up this morning and it took him minute to figure out what was going on. He walked through the TP without even realizing it was there. Crash tore his down the moment he opened his door. 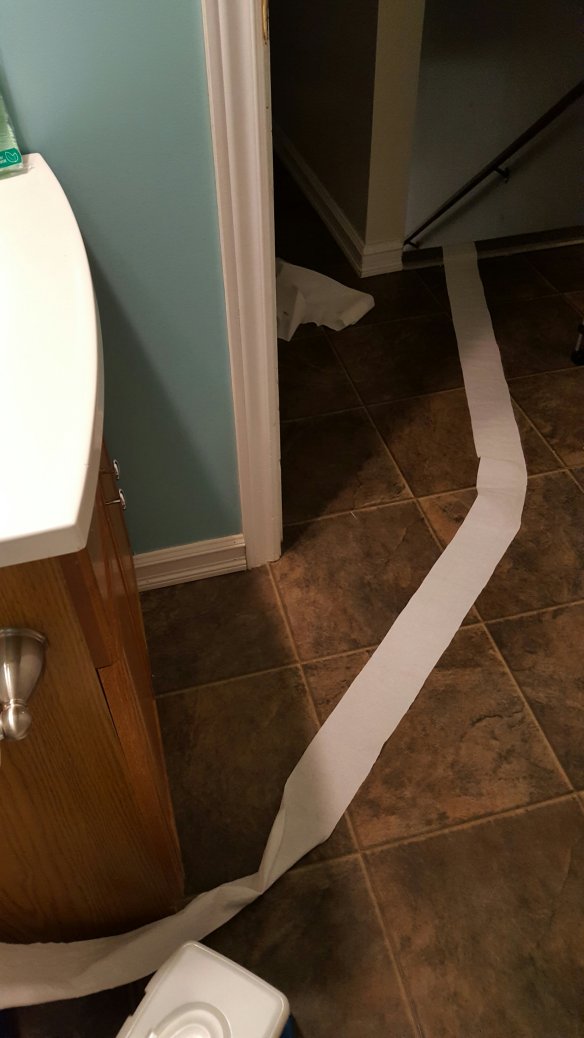 We knew it was just a matter of time before they started making a royal mess. This trick is the elves favorite. The old flour-looks-like-snow gag. It never gets old.

“Uh dad! Come see the mess they made!”

The boys know we hate it when they make messes. It’s entirely different when the elves are the guilty culprits. Marshmallow snowmen. Snow elf angels. Bang wrote them a note…

“Were did you get the toothpick from and the marshmellose.”

I can only imagine what new stunts they will try to pull this year!

Follow All In A Dad's Work on WordPress.com
Join 1,533 other subscribers