Then I was asked to be one.

I speak about none other than Tracey Tobin. When I joined WordPress she was the first one I followed. I still follow her. Not in that creepy stalker way… just on WordPress.

Tori is haunted by past mistakes that caused her to lose her most beloved people. Wracked with guilt and haunted by has happened, she yearns for a new life. When a gift is mysteriously returned to her 17 years after events were set in motion, she finds a way out. However, this new world isn’t so perfect. It has it’s own problems. And it’s own secrets.

Read The Other World: Book One on your Kindle App. It’s only $2.99. Bonus: If you’re a Kindle Unlimited user you can read it for free. FREE! And really, you can’t beat $2.99 either. That’s almost free.

If you’re an old school reader and prefer to hold a book, to smell a book, to take a book to bed, the paperback version is coming very soon.

You can find it here: The Other World: Book One 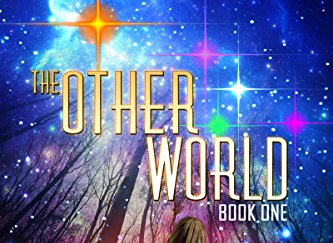 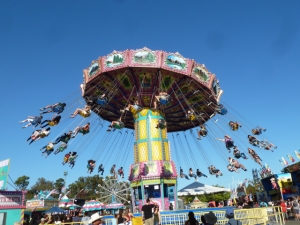 He gripped my finger tightly, looking skyward. “Dad, can we go on that one?” he asked excitedly. “You sure?” I asked. People laughed as the swings rotated, seats pushing outward from the ride. Suddenly, a loud clunk echoed through the fairgrounds. The sound of metal on metal screeched. Black smoke began billowing from the sides and the ride began spinning faster. Faster and faster and faster it went. Screams could be heard over malfunctioning ride. Chains started snapping, people and chairs flung outward, landing and sliding over the concrete.

I blinked the image away and listened to the laughter. “Nah, not today.”

This is a story in 100 words or fewer for Friday Fictioneers hosted by Rochelle-Wisoff-Fields based on the photo above. Click the blue frog to read more stories inspired by this photo!

The suspense drives him wild! He knows what’s coming next and he wriggles waiting for it to happen. It’s the reason we played the game in the first place. As you can see, the words were changed to make a three year old boy laugh. But that last little piggy hangs on… waiting, waiting…

As a child, I was bonkers for Christmas. The entire month of December, I couldn’t sleep at night from anticipation.
~Rosecrans Baldwin

As Robyn explained, the waiting, the suspense, the anticipation is as thrilling as the event. It makes me think of Christmas morning. This year, our count down chain started with 42 links. 42 sleeps away from the big day. Each day would bring something new. We started decorating slowly. A decoration here and there. Outdoor lights went up early due to an unusual 20 degree (Celsius) day in November. After American Thanksgiving* our tree was put up and the boys decorated it. A sure sign that Christmas was coming. Of course, all that waiting leads up to an hour or 2 of opening presents that passes very quickly. It’s all that waiting that makes the morning so exciting.

In the world of running, it’s the same. My DW has signed up for her first running event, Sole Sisters. It’s not until June, but her training starts now (sort of). As with any running event there is training to be done. Practice, practice, practice. Then race. Think of the Olympic sprinters and the months they spend training on the track. Yet, their race is over in less than ten seconds.

Your favorite movies and books do the same thing. I love the Game of Thrones series. I just wish there weren’t 6 years between book publications! The suspense kills me (though not nearly in any way that George R. R. Martin would). And my all time favorite book, “The Book Thief” by Markus Zusak, I wonder the whole way through if and how Liesel and Max survive the story. Terry Brooks is among my favorite authors. I might own nearly every book he’s published. He excels at suspense. Just as the chapter is getting good, BOOM, it ends, forcing me to read another chapter to find out what happens. Which of course, leads to something else happening that I’ll have to read in the next chapter.

Then, finally, that last little piggy yells “tickle tickle tickle, all over you” and laughter ensues. After the tickling stops he’ll tell me, “Now the other foot”.

“Well,” said Pooh, “what I like best,” and then he had to stop and think. Because although Eating Honey was a very good thing to do, there was a moment just before you began to eat it which was better than when you were, but he didn’t know what it was called.”
A.A. Milne