We applied for Crash’s passport on July 7th at a U.S. Consulate. The appointment went so smoothly it was eerie. We knew we were scheduled to travel on the 21st and it was supposed to to take 10 days for the passport to get to us. However, if it took 12 days it would arrive the day we were planning to leave. I really wasn’t counting on the government to give a rats ass when we were planning on traveling. I couldn’t have been more wrong. It only took 8 days. Eight.

DW and Bang’s passports were ready at the passport office last Monday. The passport office is 3 hours away. Fortunately, a trustworthy friend was going there this weekend anyway. WHOO. She got a gift card to the liquor store 🙂 She’s a teacher. We know she’ll use it. She’ll be returning to town on Sunday with our final 2 passports.

So we’re all set. I’ve already began making a list of things to remember to take. Socks, underwear, shoes, and other important things like Stuffies.

Now, I just finished a 10k run while pushing Bang. He loves going with me. He’s finishing his bedtime snack of toast and yogurt  (or bed lunch as his Nanny calls it). Then it’s up the stairs and into bed. Crash is having a sleepover at Nanny and Pop’s house. So it’ll be a quiet evening, though starting a bit late. It’s all good. It’s summer time.

In one week we embark on our 20 our drive to Maryland. There is so much I/we would like to do while we are there, there is no likelihood of doing all of it. First and foremost, we’ll be visiting all the family we haven’t seen for five years: END_OF_DOCUMENT_TOKEN_TO_BE_REPLACED

We made an overnight trip to the city on Monday. We had to get passports done but we had to do it in person so we could get them expedited. Plus, Crash’s had to be done in person because he’s getting another American passport they require children under the age of 16 to be done in person at the nearest US Consulate and they require you to have an appointment. July 7th was the only date open when I checked 3 weeks ago.

So we left Monday to get DW’s and Bang’s passport done at a Canadian passport office. This would be the beginning of amazing trip for two kids who don’t get out much. First, we had to ride an escalator. Bang wasn’t too sure about them. He’d never seen them before, poor soul. But after he was on, he was loving it. DW noticed that he kept moving his hand up as it slid past so she told him to put his hand on the black rail because it moved with the escalator. He was amazed.

Then came the elevator ride. They’ve been on plenty of elevators before, but none like this one. It had a tall, vertical window so we watched ourselves rise to the 15th floor. They were amazed.

An hour and half later we were back on the elevator and then back down the escalator with two passports set to arrive next Monday. Bang was looking for more escalator rides, but we just headed to the boy’s cousin’s place (technically, it’s DW’s brother and sister-in-law’s place) where we would be visiting and spending the night. The boys got to have a sleepover with one of their cousin’s in his bunk bed.

By 8:15 we were up and at ’em and back on the road to attend Crash’s 9:00 U.S. Consulate appointment. Getting into the consulate was no easy feat. It very much resembles crossing the U.S. border. We needed to prove our identities and Crash’s. Then, two at a time, we proceeded through security. He scanned our bags (or he would have had we brought any) and we walked through a metal detector. He kept our truck keys because they had a fob on them (the remote to lock and lock the doors). The boys were unusually well behaved. Crash sat and read books while Bang played quietly with a matchbox truck we had brought. 45 minutes later we were walking out of the Consulate having completed the application process. Badda bing, badda boom. Everyone’s passports were completed with no hassle!

Before leaving, the boys wanted to ride the elevalator to the top floor to look out a window so we went up to the 19th. No window in this elevator. The 19th floor was a bank and a kind receptionist overheard us looking for a window to look out and she offered to take us into the bank to a conference like room. From there we had an awesome view of the the city and harbor.

We had parked in a parking garage before going into the Consulate. Once we were back in the garage we noticed a sign that said “Please pay inside”. Slightly confused, as there was no where to pay inside the building we had gone into, we asked a few gentlemen where we should pay. Apparently, they were working on the gate that lifts up after you insert your paid ticket. He told us, “We’re working on the gate so it’ll be free for you today. Just drive down and we’ll lift the gate for you.” This made the beginning of the day a bit surreal. No hassles at either the Canada passport office or the US Consulate and now free parking in the city? Could our trip really be going this well?

Then we went to the mall and this is where the real fun began. DW needed a bathroom, but the first bathroom had a big line up and DW couldn’t wait so we headed up to the bathrooms on the 2nd floor. ESCALATOR! Upon reaching the 2nd floor, DW spotted some friends. So while we chatted with them for about 10 minutes, Crash and Bang rode the escalator like it was an amusement park ride. Up one, down the other. They did that for the entire 10 minutes. 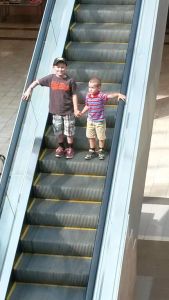 Of course, this is all Bang now wanted to do. Our main goal at the mall was to find burnt orange shirts for the boys to wear during family picture time when we go to visit family in the States. After a few stores and not finding anything, we opted to change colors since we found nice pastel, lime color shirts for Crash and Bang. Now we just needed to find that color for DW and I. Into Gap we went. There was a Children’s Gap attached as well and we found ourselves there even though we already had shirts for them. Good thing we went in there… we found exactly what we were looking for. AND they were 1/2 off! Win, win! So we returned the green shirts.

After lunch at the mall we headed over to another mall, more like a HUGE strip mall. They boys had gift cards to spend at Toys R Us from their aunt and Uncle and cousins. We split up, me taking Crash to look and DW taking Bang to look. Crash picked up a few small things, not wanting to spend all his money one big item. Bang apparently wanted one big item because when we caught up them he had a large marble race. He later changed his mind when he spotted a large garbage truck. Nevermind that he already has nice garbage tuck. He wanted this one. Crash found a coloring book that, according to the cover, “Comes Alive” with a free app on a tablet, a small lego set, and a Wolverine mash-up. We also picked up new sunglasses for the boys. We finally found boys purple sunglasses for Bang (his favorite color) and grey one’s for Crash. Their haul cost us a grand total of $8. Thanks Uncle B and Aunt Sara and KK and Owen!!

Then I spotted a Sport Check and I’m glad we decided to go because more hilarity ensued. We weren’t in the door 2 minutes when Bang pulls down the shorts of a male mannequin and loud enough for the surrouding area to hear says “That’s his pee pee”. We had caught Crash earlier looking up the dress of a mannaquin in a women’s clothing store. Ugh… the embarrassment! 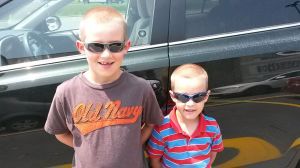 Things don’t usually go so according to plan for us. Our plans are often thwarted by hassles, lost luggage, getting us lost, not finding what we’re looking for or any other numerous other things to cause hiccups in travel plans. This trip went smoothly with a few lucky bonuses besides. And Bang is still telling everyone about the “moving stairs”.

Have you ever had a trip go exactly as you planned it? What were you expecting to go wrong that didn’t?

My Tweets
Guess who learned to swim to the bottom of the deep end today? The 8 year old can go 8 feet under. #Kids #Proud #Dad #Swim #Dive #Pool