I mentioned it before in one of my Sunday Shares, but I’m going to mention it again.

A friend of mine had just finished running 26.2 miles in Boston in 2013. He was in the medical tent being treated for dehydration when the bombs went off.

He was invited back to run in 2014. There, he became connected with a charity called 50 Legs.

The purpose of 50 Legs is to provide amputees with the necessary care and prosthetics that they could not otherwise afford and help them live a happier and healthier life.

This morning he was interviewed on a radio station discussing that terrible day and what he’s doing now to contribute.

If you feel so inspired that you’d like to give, you can visit Jody’s donation page here.

I’ve written of this second charity as well, but feel it deserves a mention, too. It’s my brother’s Ride for Roswell.

Funds raised through The Ride For Roswell support the cutting-edge research and patient care programs that benefit the 31,000 patients who turn to Roswell Park for hope.  Donations are further used to improve the patient and family experience, support new clinical treatments and procedures and educate the next generation of cancer scientists and clinicians.

This is the 7th year my brother has participated in this even. This year he rides in honor of Melina Selent. When she was just 10 months old she developed retinoblastoma, an eye cancer. Fortunately, it was just in one eye. Unfortunately, her eye had to be removed. That was in 1996. This summer she is scheduled to graduate with a BS in Biology.

My father is riding for the 7th consecutive year, as well. He rides in memory of my grandfather (my mom’s dad) and for a college friend of his.

It was in me to give last night. Actually, it was in me to give four times this year. I’ve been giving, albeit not regularly until now, since I was 18. I’ve given over a gallon in the US. After 6 more donations in Canada I will have given a gallon here, too.

I’m not scared of needles. Yes they hurt. But not as much as cancer, or that car accident, or whatever is causing someone to need blood. Life, really. For what are you without blood? 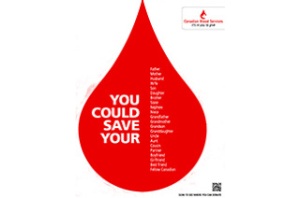 Two or three drops of blood can contains about a billion red blood cells. Within the red blood cell is hemoglobin, which the nurses check for with a quick blood sample from a prick to your finger. These hemoglobin are responsible for carrying oxygen throughout your body and carrying carbon dioxide from the cells to your lungs to be expelled. They only live for about 120 days before being removed by your spleen. New blood every four months!*

The white cells fight off infections. Unfortunately, they don’t survive outside of the body any longer than 24 hours.*

The platelets are responsible for clotting. Without clotting we would bleed to death with the slightest cut. Platelets stop you from bleeding out.*

Plasma is the “river” that carries the cells and platelets to where they need to go.*

I almost forgot. They called me to ask me if I would be in. I was already 20 minutes late because we were having a late supper. I told them I was just finishing supper and then I’d be in.

I took Crash with me. He’s been several times now. He has a new MadLibs book that we’ve been having fun with, so we took that along to entertain us. Once Bang found out we were leaving, he wanted no part of being left behind. He’s never been.

But once he found out there would be cookies and juice at the end he turned up his angelic charm. They watched me get my finger prick. But I had to leave them momentarily to have my blood pressure checked and answer those questions about sex and drugs and monkeys.

Then it was on to give. They were fascinated by the oscillating machine that keeps the blood from clotting while being collected. Meanwhile, Crash and I filled out some MadLibs. Lightning bolts from their butts is a story for another post.

8 minutes later I was done. An hour after I walked into the clinic I was sitting at the juice and cookie table with my two best wingmen. They are currently both terrified of needles. But hopefully, one day they’ll be able to give, too. Hopefully, you’ll give, as well.

Plus, I often wonder while I’m donating, if something happens to me and I need blood, what are the chances I’ll get my own blood? 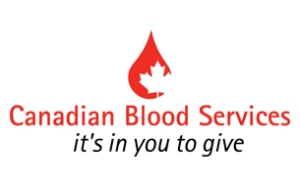 Follow All In A Dad's Work on WordPress.com
Join 1,533 other followers