For those who follow me in the Insta you saw that we were at an air show yesterday. It was incredible to watch. The Canadian Air Forces’ Snowbirds were in town at our tiny, little airport. Nine fighter jets demonstrated their precision with formation fly overs and high speed fly bys. 600 kmh to be exact. Having grown up near an air force base and the U.S. Naval Academy, I have seen a few air shows. The Blue Angels and The Thunderbirds always fascinated me. I was still as excited as the kids to see this one. So was DW. I would absolutely love to fly co-pilot in one of these.

After the show we got to meet the nine pilots and get their autographs. They each signed the boys hats and a poster for each of them. Then we spoke to the lead technician. He was great to answer all of our questions. He even let us look in the cockpit! I couldn’t believe when he told us the planes were built in 1965. They are 53 years old!

1. What was your favorite part of the Air Show?

Crash: The tricks. My favorite trick was when they would go straight up all together then spread out with a smoke trail to look like fireworks
Bang: When the planes looked like a hand and when they went sideways and passed each other really close and when they went over us really loudly. 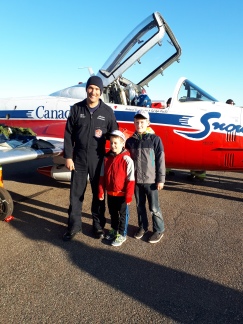 Crash: A Snowbird pilot
Bang: A dog washer and a chef (I thought he’d be a Snowbird mechanic after talking one for a half hour last night. He says no, that’s too hard)

3. What is something you learned at the Air Show?

Crash: Its hard to fly in the wind and if a bird gets caught in the jet engine the bird is dead.
Bang: How they make the smoke. There’s these two things holding deisel and pipes connected to the back of the plane. Then deisel comes out of the back behind the engine and makes smoke.

4. How do you talk to someone who doesn’t speak your language?

Crash: You wave and shake your head yes and no and try to translate
Bang: Hand motion. You could write on a piece of paper and if he doesn’t know the letters you can translate it.

Crash: Shareeya Wayga (this is what he wanted to name the Bang while DW was still pregnant)
Bang: Leeya

8. Who do you know that lives farthest away from us? How far away are they?

9. What should we do this weekend?

Crash: Have my friend over so we can make YouTube videos. We want to make a try not to laugh video.
Bang: If it’s nice we can play in the sprinkler or have a water balloon fight or fly a kite if we don’t get electrocuted.

10. What do you wish Alexa (Amazon Echo) could do?

Crash: Clean my room and give me money
Bang: Have a face and arms and play every song in the world.

** We are not-no-way-in-hell getting a baby sister

This is how much these birds love flying…