Crash: I would name it RC Cars and Trucks and and sell remote controlled vehicles – cars, trucks, hamsters, drones…
Bang: I would sell cans of soda, chips, some cakes and name it “The Junk Store”

2. If you could grow anything in the garden, what would you grow?

3. If your stuffie could talk, what would it say?

Crash: He would say a lot of stuff like Lets play Minecraft and Can we snuggle?
Bang: I love you (and mom and dad, too)

4. If you were to draw me a picture right this instant, what would you draw?

Crash: I would draw that car on TV that goes 360 miles per hour
Bang: Scribbles

Crash: Chicken noises
Bang: Cats purring and sneezing dogs and cannons blowing off because they’re sounds I can make

6. If you could ask a wild animal anything what would you ask it?

Crash: I would ask a cheetah, “Can I adopt you?” so when I miss the bus we can zoom there
Bang: I’d ask a giraffe to lift me way way high

7. If animals could drive, which one would be the most fun to ride with?

Crash: An elephant
Bang: A giraffe 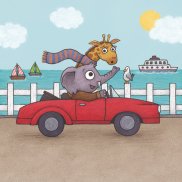 8. What are three things you want to do this winter?

Crash: A racecar driver… actually no. A robot designer
Bang: A cat sitter

10. What’s the funniest word you know?

8 thoughts on “Questions I Asked My Kids: ep55”