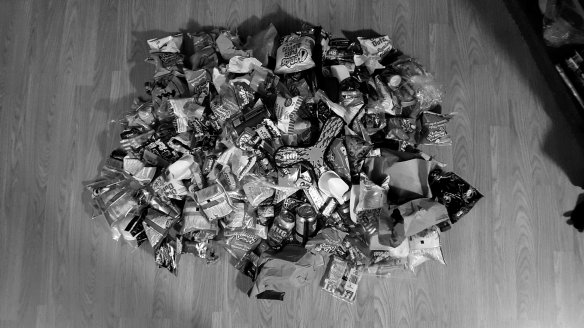 Day 6 of 7 days. 7 Black and White Photos of your life. No people or explanation.
Thanks A Momma’s View for nominating me for this challenge!

So my belly doesn’t ache and I’m not hungover from Halloween or in a diabetic coma from all the sugar (not to worry, I’m not diabetic, either). Thankfully, trick-or-treating was a success this year. Last year? Bang made it, literally, three houses up the street and was ready to come home. If you don’t remember, seriously, go read it. It was an extreme trial in patience. It was so extreme it should make it into the X-Games next year.

This year’s buzz topic was on an age restriction for trick-or-treaters. I was so happy to hear of neighbors who passed out candy to the high school kids who had donned costumes and were out begging for free candy. The best argument I heard was,

At least they’re not causing trouble!

The buzz topic I kept hearing and reading in the media was more about offensive costumes. Many people think that using cultural costumes is a no-no. I was going to write a satirical piece where all the animals found Human’s costumes offensive, but I either didn’t have the time or didn’t remember. I forget which.

We had an alien and a skeleton. They collected quite a haul, too. We were pleased to see the dentist was giving out toothbrushes and toothpaste. Just like last year, I’m envoking a pretty stiff “Dad Tax”, too. They will be taxed without representation. Should you see all their candy floating in Boston Harbor, you’ll know their revolt has begun. However, they like their chocolate and chips so much that they are willing to give me some of it in order to save the rest. Bang has even given his away to other people (the school custodians and a parent we always see at the ice rink).

Now, if you’ll excuse me, I have some tax collecting to do while we catch up on a few shows (The Good Doctor and This Is Us and Gold Rush)