I’m a love ’em sorta dad. Since today is December 1st we made sure to haul out the Christmas decoration yesterday. Fortunately, the boys were home from school. Not because of the two inches of snow we got but because it was an in-service day for the teachers.

We began the day by buying snow boots. It’s amazing how fast feet grow between March and November! Then we played in the snow. Bang and I built a snowman. The snow was so wet and heavy that he ended up crushing himself (the snowman, not Bang). He was mad because he couldn’t figure out what to use for eyes. Crash attempted to snowboard down the driveway. The snow was so wet and sticky that he did more scooting than boarding. He got mad and stormed inside because he was “frozen”. I told him to “let it go. let it go. Don’t hold it back any more”.

Anyway… back to where this was going…

Where were we going, again?

Oh yeah… Christmas decorations. The boys and I hauled the stuff up from the basement. The Fisher Price Little People nativity scene is erected. Bang likes to pretend it’s a train and pulls baby Jesus all over the house.

Yes. That’s a wise man where the Angel should be.

The “winter scene” is arranged on the bookshelf. 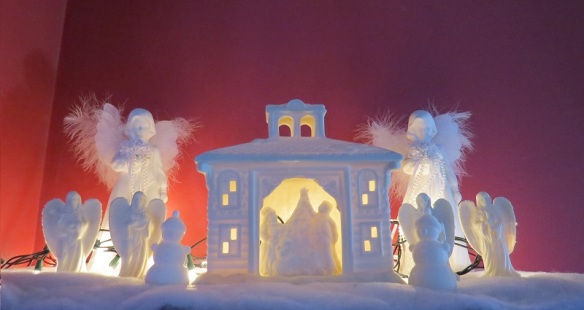 All the beautiful angels are watching over the cozy house and the 3D printed snowmen.

Both boys homemade and schoolmade handmade decoration are up. I’ll share these in the days to come. These are the special pieces. They’re irreplaceable. They are priceless items that could never be replaced because they’ll never again be the age and size they were when they made them. Unless I find a Delorean and 1.21 gigawatts.

The lights were put in the window and the Christmas tree was put up. Mind you, it wasn’t decorated because of a SNAFU (I love that spellcheck doesn’t underline that word). It’s weird how you when you unplug the Christmas tree in January all the twinkly lights are shining happily. Yet, when you plug it back in in December half of them burned out. WTH? How do they burn out when they’re not plugged in? I have one guess.

The elves did it.

You see, we have two mischievous elves who LOVE Christmas lights. They return to our house with joy and excitement every year when they see our lights beckoning them. So if you’re looking for elf ideas or just a simple reminder to move them (right Anxious Mom?) you’ll find that here. As I did last December, I’ll have my regular post plus an Elf update. I already have a few idea for Woody and Elfis. Crash found them at 5:45 this morning. Bang woke at 6:30 and came bounding down the stairs to find them. To be honest, I’m as excited as the boys to see these two back in action.

The magic is working.

Elfis in the penguin cup because Bang stuffie at night is a penguin. Woody is in a Moose cup because he has an uncle who has called him “MOOOOOOSE” since he was born.

34 thoughts on “My Two Buddies”