There’s a picture of it on the internet therefore I am not the only who does this. I spell it like it sounds. That’s fonetix for you.

If you can read that, you must be a teacher.

Crash has now written 4 or 5 books. Mind you, they are entry level readers he wrote for his 5 year old brother, but still. He wrote books. He, himself, is reading slightly above grade level. His brother is following suit.

But the English language is anything but easy. Bang catches on really quick to word families. He sounds them out one letter at a time to discover the word. Sometimes it works. Sometimes it doesn’t.

Then there’s enough, though, plough, and cough.

Ignoring the exceptions, of which there are many, he sounds out new words perfectly. After reading them a few times they become locked away in the sight word vault. I wish I could memorize things as easily.

Alas, I have a photographic memory. I just don’t have an SD card. I have memory like a sieve. It’s on par with that of a goldfish…

I had it a minute ago, I don’t know where it is now.

Anyway, what was I talking about?

Bang comes home with a new book to read from school every day. He’s already progressed three levels since September. Crash reads every night as well. He’ll either read to himself or to his mom or I. Then we’ll ask him about what he read. Lately, he’s into books that take place within the world of Minecraft. But isn’t that the beauty of books? There’s something out there for all of us.

Watching an emerging reader is much like watching butterfly emerge from its chrysalis. That it takes years instead of minutes makes it that much more exciting.

I wonder what kinds of chapter books he’ll like to read?

What kinds of books do your kids enjoy reading? 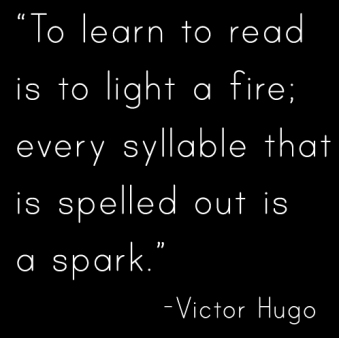