The view from the house. The alpacas are to the left of the lane.

Once upon a time, 3 year ago, we took a trip. On this trip we encountered a petting zoo which had a donkey and an alpaca in a small stable. We approached the stable to see the animals. There was a four foot wall (not a fence) enclosing the animals so when we entered the stable we couldn’t see any animals. DW was holding 2 year old Bang and they went to peek into what appeared to be an empty pen.

Suddenly, the alpaca who was laying against the inside of the wall they were going to peek into, stood up. You can imagine a two year old’s shock at suddenly being face to face with an animal who wasn’t there just a second ago.

He was traumatized and probably will need counselling as an adult and all his fears will lead to this single incident. If we wanted to keep him out of something (the basement at Nanny’s house) all we just told him there were alpacas down there. He wouldn’t even touch the door after being told this little white lie…

But then he turned three. A three year old’s curiosity is formidable. He wanted to see the alpacas in Nanny’s basement. We were busted in another lie. (see The Death of the Claw for our other big lie)

We heard a friend of ours was raising alpacas and welcomed visitors to her farm. So we went not knowing how Bang would react after his traumatizing incident with the “pop-goes-the-alpaca” of the previous summer. Turns out he loved them. The boys got to feed them, too. One of them was being greedy so Crash had hidden a carrot behind his back so he could feed it to a different alpaca. Miss Greedy Alpaca wasn’t impressed so she spit on him and knocked him down. He was okay, and we all had a good laugh.

So we went back yesterday. There were some extra alpacas! Some babies were born in January/February. The boys got to pet them. One of the babies hadn’t been sheered yet so it still was still fluffy. If you haven’t seen a baby, fluffy alpaca, I highly recommend you find one and go pet it. Alpaca wool is warmer than sheep’s wool and it’s not itchy!

We also discovered our friend got some chickens. She had three hens for laying eggs. Unfortunately, a fox or coyote got two of them. She also has 20 “meat birds”. They were a month old so they weren’t yellow, fluffy chicks any more. 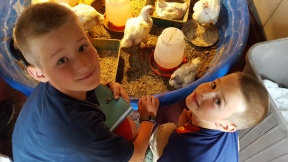 You can visit her facebook page for more info and tons more pictures.

This Taboo Word Challenge is getting tougher! Today’s word was “that”.
To read more posts without the Taboo Word (that) or to join the challenge just click the blue frog…

To add the blue frog to your post get the InLinkz code.