First, I want you to imagine a guinea pig. Imagine it in all it’s hair. Now removed its hair. Shave it clean off. Right down to its skin. Here’s the ugly thing you should be imagining right about now… 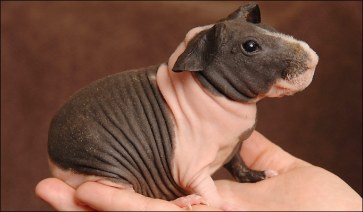 This guinea pig was not shaved. It just has no hair. It’s hairless. Bald. I can relate.  Maybe it’s not so ugly.

Fun Facts: It’s a hairless guinea pig called a Skinny Pig. They have been in existence for less than 40 years. They weren’t discovered on some uncharted island far away, but in a lab. They were a cross between a hairless strain and a hairy guinea pig. They want to breed them to use as test subjects. Hence the expression guinea pig to come to mean a first time experiment.  They are mammals (just like us bipedal humans). These new Skinny Pigs became test subjects in dermatological studies. Yes, skin testers.

Fun Facts: Without hair they are more sensitive to temperature changes. Much like we are when we’re naked. They also also eat slightly more than their hairy counterparts in an effort to maintain their body fat. They are also susceptible to sunburn and skin infections, because, you guessed it, they ain’t go no hair!

Fun facts: I know these things exist because Bang wants one. We saw one some time ago – at least 6 months, maybe more. It was love at first sight. He’s been talking about it ever since. Just yesterday he mentioned again that he still wants a skinny pig.

I still want a bearded dragon. They make lousy running partners, though.