I haven’t given an update on how Crash and Bang are doing with their chores in a couple weeks. I bet you’re just dying to know how it’s going.

But all of that would be a big, fat, lie. Bigger than Nixon saying “I am not a crook.”

It’s still a headache to get Crash to clean. With the drama that ensues, you would think I was asking him to kiss Jabba the Hutt. Today, all I wanted him to do was put away his laundry that I had spent most of Saturday washing. Bang put his away, no questions asked. Crash acted as if he had to pick up dung beetles. Hey lay on his floor face down. He moaned. He argued that he didn’t want to. 20 minutes later he finally got started. He damn near needed supervision. He didn’t want to hang up his clothes in his closet. He tried to just throw them in.

I don’t think so chach.

Then I asked him to make his bed. Then I asked him to pick up all his books off the floor. I thought he was going to cry. By the end of it all, his room was tidied and DW and I were pissed that we had worked harder to get him to clean than it was for him to actually do the cleaning.

All I have to say is, thank God for bedtime.

So, in total, Crash earned a whopping $1. He did four chores all week. HA! Too bad he peed on the toilet seat twice and I had to clean up one of his meals. At .25 per infraction, he had to return .75 of his $1. Yes. He earned a quarter last week. Bang got to keep his dollar. He did four chores as well. He’s taken to sitting down to pee “like mom”. Therefore, he no long pees on the seat.

I feel partly to blame (just a small, tiny, minuscule, microscopic even). I didn’t keep on them last week. I didn’t make them do chores regularly and therefore they started believing they didn’t have to do them. They were cleaning up their messes after meals. So I have to give them credit for doing at least that.

This week will be better. They’ll get back to doing chores regularly. Right after school. I’ll let you know how it goes. 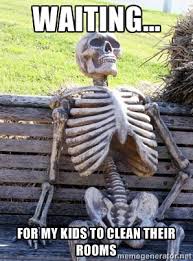