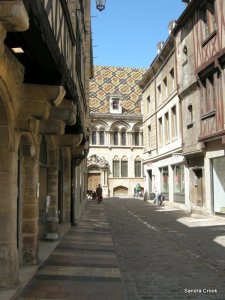 Swords flashed in the noon day sun as three men in blue gave chase to one in black. “All for one and one for all!” The black clad figure darted through columns with unmatched agility and swiftness. The assassin was lost from sight around a corner. The three skidded to a stop. The assassin was cautiously stepping backward, sword raised defensively. A fourth man carefully pursued the assassin, each waiting for the other to lunge. Suddenly, swords clanged, dust rose. The assassin, cornered by four swords, stood sweaty and breathless and nervous. One  removed the assassin’s hood and all stood speechless. “Your Majesty?” “Yes,” she replied. “And if your brains work half as well as your swords, you’ll let me go.”

This is a story in 100 words or fewer for Friday Fictioneers hosted by Rochelle-Wisoff-Fields based on the photo above. Click the blue frog to read more stories inspired by this photo!

32 thoughts on “The King’s Assassin”