It is not often I talk about this, though I have hinted at it in previous posts. It’s not that it’s difficult to talk about. It’s that it is filled with such mixed emotions. Excited. Scared. Hopeful. Helpless. Confused. Joy. It was quite the roller coaster.

Halloween of 2006 is when it began. My DW presented me with a Halloween card in which one ghost told another ghost it had to lay off the “boos”. Turns out Wifey had to lay off the “booze” also because she was pregnant with our first born!  So we did what most new parents do, bought prenatal vitamins and What to Expect When You’re Expecting.

Then Wifey did the triple screen test at her prenatal check-up one day. It came back with a slightly elevated risk of chromosomal abnormality. This made us nervous though we were told this happens often and it doesn’t necessarily mean anything.  At 17 weeks we took a trip to see a maternal fetal specialist, anyway. He did an ultrasound but couldn’t find anything conclusive, but did notice something abnormal with the baby’s heart. Technically, it was his technician who spotted it (she was top in her class). We were then set up with a pediatric cardiologist.

At 24 weeks we visited the cardiologist in hopes of finding out exactly what was going on with our baby’s heart.  We did. Transposition of the Great Arteries. In mom and dad terms, his aorta and pulmonary artery were reversed. We also found out he was going to need open heart surgery pretty much immediately. Not exactly what a new parent wants to hear about their perfect, little bundle of joy. Wifey was up until 3 am that night researching what it was all about it. Big mistake!

Fast forward 16 more weeks and Wifey was being induced. We chose induction because we wanted to be at the hospital when she was in labor. We lived two and half hours away and didn’t want to be enroute when the baby was born. Turns out we had 40 hours. 40 hours of labor finished off with two hours of pushing and poor Wifey wanted nothing more than to be stripped naked and hosed down by the fire department (and a drink)!

Well it sure wasn’t the fire department who rushed into that labor and delivery room. It was Lindsey Neal (the resident destined to  deliver our baby) and a dozen doctors, specialists, respiratory technicians, and nurses. I was a proud father who cut the umbilical cord and the nurses cleaned up our baby and handed him to his mom. It was a beautiful moment. However, it only lasted about 30 seconds before he was taken away, swaddled and placed in his incubator and wheeled away. My parents and Wifey’s mom saw him roll by but didn’t get any more than that. He was born at 3:27 in the morning.

Wifey had had an epidural (which we now regret) so we had to wait for the anesthesiologist to remove it. That didn’t happen until around 7am. Wifey got cleaned up and proved she could walk to the bathroom and we headed to the NICU to see our baby. Of course, it was shift change. We had to wait another hour so we got a bite to eat in the cafeteria (which was pretty good, actually). Finally, at around 8 we were with our baby who we quickly nicknamed “The NICU Bouncer” since he was the biggest baby there. He was 8lbs, 9oz. There was a set of twins born the same day whose combined weight was less than his weight! 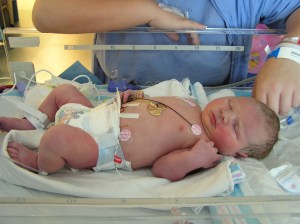 This is how we met our newborn. Hard to tell there’s anything wrong with him! This photo was before the breathing tube and his pulse/oxygen monitor he would receive later on his 1st day.

Here he is later. You can see his glow toe (oxygen monitor). The ventilator kept his oxygen saturation up, but it also kept him from making any sounds. This is how we spent the next four days. We would stay with him until 11pm-ish before going back to our room at the Ronald MacDonald House and we’d be back with him by shift change at 8am. It’s still hard to believe his start.

His “spaceship” incubator that transported him to the OR.

Then came our son’s second “birthday” when he was 5 days old.  His surgery was scheduled for 8am but we were at the NICU early so we could be with him before they put him in the incubator (which we joked looked like a spaceship). We followed him as far as they would let us telling him “see you soon” when the nurses told us we could go no farther. We quietly, solemnly, went up to the waiting room. Silently terrified. My parents and DW’s mom were there with us. There was little conversation for four hours. We called down to the OR at noon and a nurse told us he had just come off bypass and his heart was beating on its own. This was great news because it meant the surgery was nearly over…they just had to close him up.

Dr. Peeler came up to deliver the news to us in person. Prior to coming to the hospital we had done our research. We knew our son’s heart would be the size of a strawberry at the time of his surgery. His pulmonary artery and aorta, the two main arteries that need to be switched, were the size of the barrel of a pen. Coronary arteries, the size of the tip of a pen, also needed switching. Dr. Peeler must have been 6’4″ with hands the size of a bear. It amazes me how he could work on something so delicate and so small. 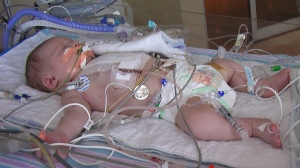 This was how we met our baby an hour after we spoke to the surgeon. He was swollen from fluid retention. He had a bazillion wires and few tubes connected to him. I felt helpless. I still hadn’t held him. His tiny hand had gripped my finger fiercely, and that was kind of the same thing. He was highly drugged and not awake very much but he was surrounded by family. He spent three days in the PICU recovering and on his third day they removed his breathing tube. He gave a weak cough then cried. It was a beautiful sound we hadn’t heard for nearly a week. Afterwards, he moved back the NICU.

Once in the NICU, they started stepping down his medications. Coming off the pain killers made him cranky so we got to hear him cry some more. His time in the NICU after his surgery is a bit of a blur since it was so routine. The main difference between now and before his surgery is that we were allowed to hold him. He was 8 days old when he lay in my arms for the first time and I was over the moon. Eventually, his tubes and wires were removed. He was left with three scars. His “zipper” where they opened him up, his drainage tube, and where the wires connected to his temporary pacemaker. 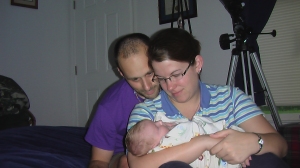 On the 16th day after his birth we were given his notice of discharge. While we were elated that we would finally get to take our baby home, we were also very nervous. We had come to trust and rely on the nurses. We would be two hours away should anything go wrong. Sure, there was a hospital in the town where we lived, but it wasn’t the same. I suppose we had a case of the “new parent jitters”.

And that was just the beginning…

17 thoughts on “With an open heart”