Now, imagine 7 years. At the time of this writing, 7 years ago was 2007. On one hand it seems long ago. Do you remember a book you read? Harry Potter and the Deathly Hallows and A Thousand Splendid Suns were published in 2007. Or perhaps a movie you watched? Harry Potter and the Order of the Phoenix, The Simpsons Movie, and 300 were all released in 2007. Jordin Sparks won American Idol that year. Seems long ago, doesn’t it? It also happens to be the year our first son was born.

Kids grow up so fast. If I’ve heard it once I’ve heard a million times. My go to response is,

Nothing shows the passage of time like watching your kids grow.
~Me

That was also the year our first son was born. He had such a rough start in life. He was born with a congenital heart defect that required open heart surgery when he was only five days old. Though it was 7 years ago, I remember it like it happened yesterday.

Anyway, that was 7 years ago. His heart defect sure didn’t slow his growth. He’s outgrowing clothes at a phenomenal rate. He’s always hungry. As I look back on the past 7 years I can’t help but also look ahead. Though, I don’t like to think about how much he’ll be eating when he’s a teenager. That’s 7 years from now. He’ll be in high school. (WHAT?!)

So much has happened since he was born. We had a major move. His brother was born. An Uncle passed away. Friends got married and had kids of their own. We’re on our 4th vehicle and 3rd apartment. There have been some big changes in seven years.

It’s always the people who have older kids or their kids are grown. I, too, am guilty of telling someone with a new baby that time passes quickly. It’s not so much the day to day routine that passes quickly. It’s the weeks, the months, and years that zip by. Sure the last 7 years since our first born came into the world has gone quickly, but what about the time I was 7? 30 some years ago there were no cells phones, internet, and if you wanted to play video games you played Atari. But what if my parents think back to when they were 7? I think George Washington had just become president! (Just kidding ma and pa!) When they were 7 schools were still being desegregated. No one had gone to the moon and a gallon of gas was 31 cents.

Now I leave you with a picture from 7 years ago… 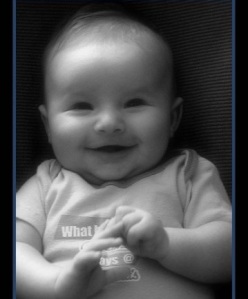